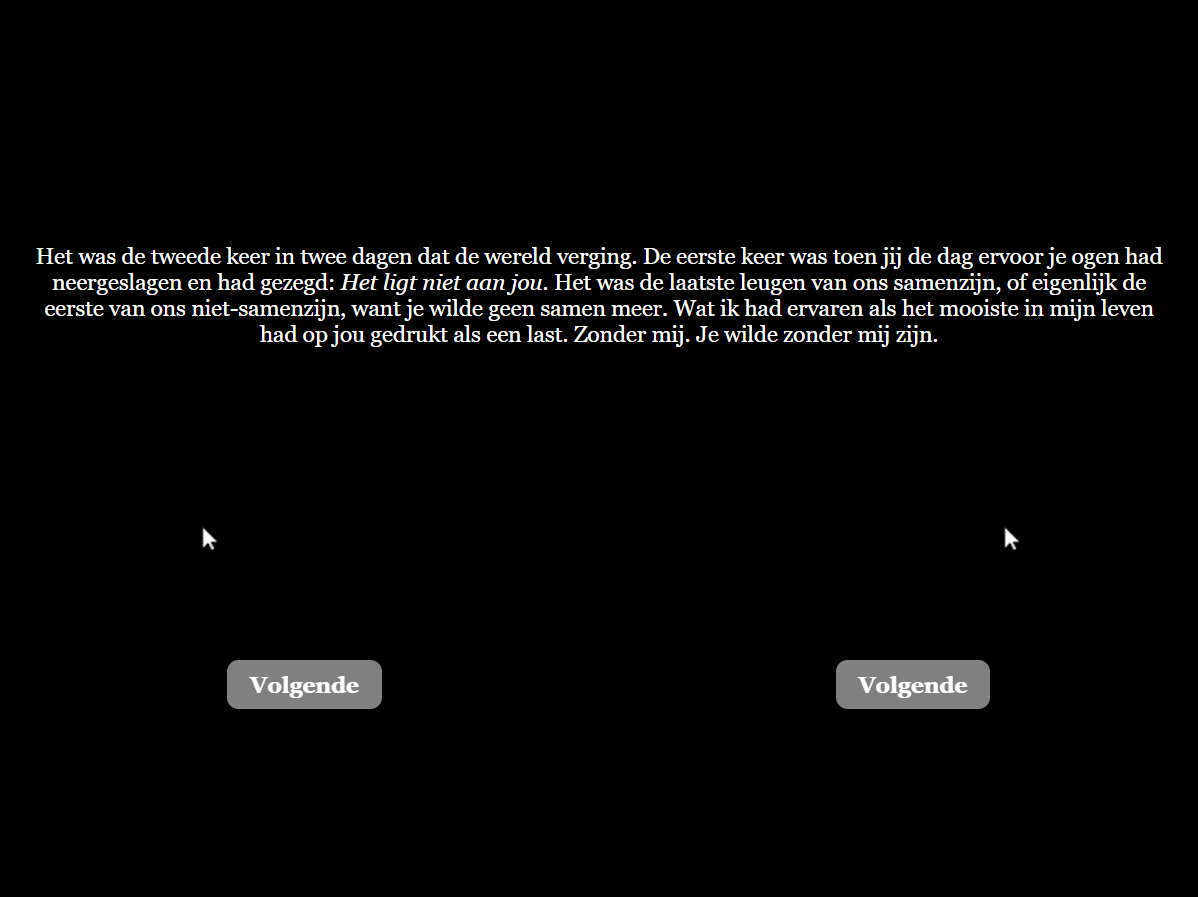 The biggest project up until now was definitely my master thesis. I got assigned to my first choice, which was to conduct a study within the field of digital literature. As a New Media Design student, this topic appealed to me because of the oppurtunity to design something myself within the field of new media. In this study, I explored uncharted relations between well-known psychological concepts concerning a novel digital literary work. Writing my master thesis included: literature research, programming a digital literary work, recruiting participants, analyzing data, and academic writing.
Opdrachtgever
Tilburg University
Software
Twine (HTML, CSS, Javascript), SPSS, Qualtrics, Mendeley, LaTeX
Problem statement

The aim of the project was to demonstrate my acquired academic skills in the field of New Media Design. Through a written report, I executed an extensive literature research, set up the experiment, analyzed and interpreted the data. My supervisor gave me a lot of freedom in choosing what it was I wanted to study within the field of digital literature.

This project was executed individually. For the digital literary work, Niek Rutten helped me with the Javascript part of the program. This project was supervised by dr. David Peeters.

Before coming up with a research question, I extensively researched existing literature to define any gaps in the field of digital literature. Digital literature can be defined as digital literature as “all the creations that are based on a tension between literariness and digital media specificities” (Bouchardon, 2016). From a New Media Design perspective, I took interest in the phenomenon of interpreting gestural interactions as figures. For instance, repetitively moving back and forth to reveal the layer underneath, could be interpreted as digging something up. In another context however, it may be interpreted as scratching an itch. This tension between the Digital (e.g. repetitively moving back and forth) and the Literary (e.g. digging something up, or scratching an itch) is what makes digital literature so incredibly interesting from a Human-Computer Interaction perspective. The following research question was formulated: "To what extent do narrative-congruent non-conventional interactions in computer-based literary works influence narrative engagement, and to what extent is this relation mediated by perceived disfluency and manipulation figures interpretation?".

In the first meeting with my supervisor, I told him I wanted to design something myself. He told me that this was not within the scope of this master thesis, because it would be too much work. After formulating my research question however, he did encourage me to design my own digital literary work. To conduct this study, I needed to program four versions of one work. For the narrative, I took the first passage of the short story "De vis in de fles" by Thomas Olde Heuvelt.

Click here to interact with the digital literary work!

The other three versions include interactions at different points in the story, as well as conventional mouse movements.

The experiment was conducted through the online survey platform Qualtrics. Ideally, the experiement would have taken place in the LocHal library in Tilburg, but due to restrictions regarding the coronavirus, the study was performed online. Within the survey, participants were asked to interact with the digital literary work, and answer questions on manipulation figures interpretation, perceived disfluency, and narrative engagement. The total sample consisted of 152 participants, of which 21 cases were excluded.

The conceptual model included a parallel mediation, which was analysed with mediation analyses using the process macro in SPSS. Findings suggested that non-conventional interactions stimulate the interpretation of manipulation figures, which supports the suggestion that manipulation figures arise when the interactor experiences an unexpected gap. In turn, manipulation figures slightly increased narrative engagement. Other hypotheses failed to provide a significant outcome due to constraints in design choices regarding the digital literary work.

In this thesis, I got to apply several skills I had acquired over the last five years, as well as gain new knowledge and skills. Even though there were some difficult times, I loved working on this project. The thing I missed most was having teammates to discuss the course of action with. Overall, I am very happy with the result and the path towards that outcome.

The thesis was rewarded with a 9.