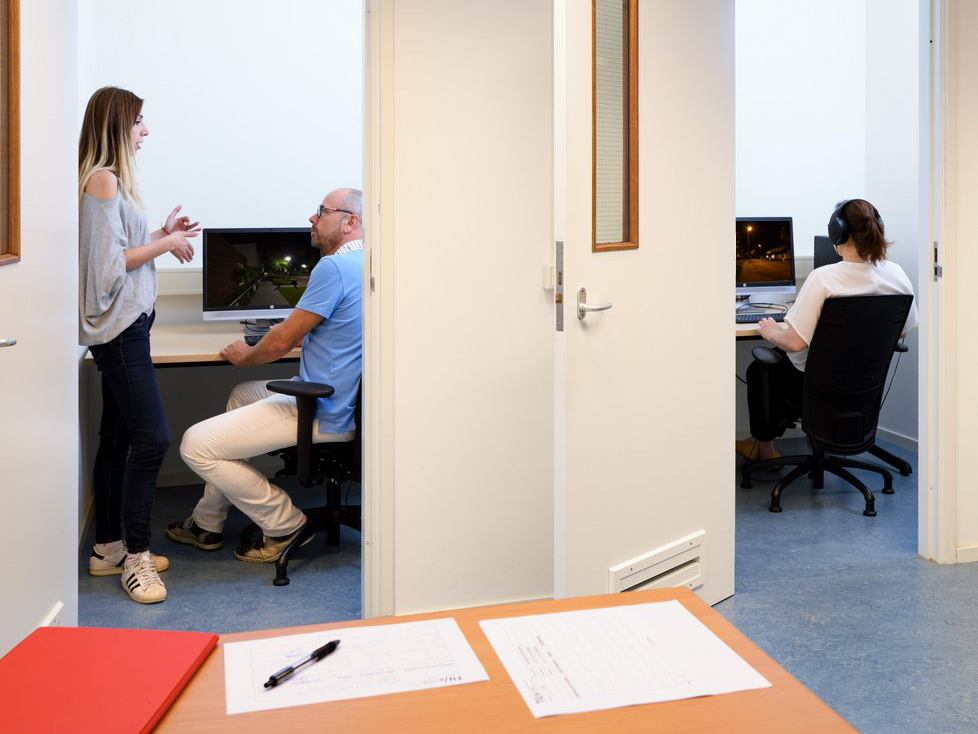 As a final project for my bachelor studies Psychology & Technology, I conducted a quantitative psychological research. This included: a literature search, writing experiment software, conducting an experiment in the lab, analyzing data, writing a thesis and defending it in a presentation.
Opdrachtgever
Eindhoven University of Technology
Software
Stata, E-prime, LaTeX, ABI Complete, Mendeley
Problem statement

This graduation project aims to integrate insights and skills acquired in the first five semesters. The aim of the project is to demonstrate this by analyzing a problem in the field of Psychology & Technology. This is being assessed using a written report. The topic I was assigned to was perceived safety in nighttime environments. The task was to conduct a replication study, in which I was allowed to formulate my own research question.

The research was largely conducted individually, as each student had their own research question. I carried out the experiment in collaboration with my fellow students Aleid Oonk and Juliëtte Wahlen. This project was supervised by dr.ir. Antal Haans.

For this project I made a clear planning in the form of a Gantt Chart. This section covers the various tasks in order of planning.

After I was assigned to a supervisor, he proposed to do a replication study. In the original study, it was found that participants rated an environment more often as safe than unsafe. I decided to test if I could influence this by applying the “Anchoring-and-Adjustment heuristic”. Here, half of the participants were asked whether more or less than 70% of nighttime environments are considered safe. The other half was asked the same question, but the word safe was replaced by the word unsafe. The percentage of 70% served as “anchor”. According to the theory, this anchor would influence the participants, after which they deviate only slightly from this percentage. The hypothesis was that participants in the safe condition would rate more photos as safe in the course of the experiment than unsafe, and vice versa for the unsafe condition.

By adding this effect I gave my own twist within the set limits. , since the topic of environmental safety was not within my field of interest.

A large part of my thesis consisted of literature research. I enjoyed this because little by little I became an expert in the field of anchoring. I quickly learned to extract useful information from an article and how to go deeper into the content by reading the articles quoted as well. Combining knowledge from many sources made my introduction unique and specific. From previous courses, I had learned to look at results with a critical eye. For example, a journal sometimes claimed that there was an anchoring effect, while this was negligible. I was open about this in my introduction.

The experiment was carried out in the Psylab in the Atlas building on the TU/e campus. The experiment lasted only 5 minutes, which made it difficult to recruit participants from the database. To determine the number of participants, I performed a power analysis, based on a meta-analysis of previous valuation anchoring studies. This resulted in a correlation, after which I arrived at 285 participants in total by means of an expected effect size. However, since there were 60 measurements per participant, I calculated an effective sample size of 90 participants in total.

We made the experiment itself in E-prime, a software especially for behavioral research.

The data analysis of 91 participants, a multilevel logistic regression in Stata, resulted in no significant difference between the two conditions. This finding was remarkable, since the anchoring effect is actually a robust theory in psychology. After further literature search, the most likely explanation was that the anchor in our experiment was not clearly enough linked to subsequent tasks. This is a valuable addition to the current literature.

What makes the anchoring effect interesting, is that a person's judgment and decision making is influenced by just adding a single sentence. A possible technological application of this effect is the interface of a website. Here the designer can choose which information is emphasized, for example how many consumers have bought a product. However, my research has shown that the anchoring effect is not effective in all cases. So further research would be needed before it can be applied.

I completed this project with an 8.